This year’s Scarva Sham Fight has been marked with a special film which was broadcast online at 11.15am on Tuesday, July 14 – the exact moment the parade was due to get under way!

After the “Thirteenth” celebrations were cancelled this year due to the coronavirus pandemic, members of Sir Knight Alfred Buller Memorial RBP 1000 produced an hour-long feature film so that Sir Knights and their supporters could enjoy the sights and sounds of the Sham Fight in the comfort of their own homes!

The film is packed with parade footage, hymns, historical features and religious messages – and is proving to be popular online. 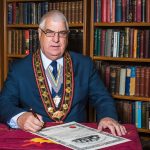