Morning Star RBP 160 Coatbridge held a short act of remembrance and laid a wreath in the shape of a Red Cross at the Cenotaph in Coatbridge last Saturday in memory of the Fallen.

Sir Knights in Scotland had been due to travel to Partick for their annual demonstration, organised by the Provincial Grand Black Chapter of Scotland, but the event was cancelled due to coronavirus restrictions.

“Each year on the second Saturday of August, we the Royal Black Knights of the Provincial Grand Black Chapter of Scotland, gather as one to celebrate the Relief of Londonderry, and as a Preceptory begin the day with a service of Christian Worship to give thanks for that deliverance before taking to the streets in public witness.

“Well, looking back it has been a long time and probably in a previous generation of RBP 160 Sir Knights, that the banner of Morning Star has not been raised outside our Encampment, and floated with pride throughout our town and further afield, for today we would have gathered to give thanks to God, for the deliverance of our forefathers who manned the ramparts of Londonderry, and stood firm and resolute under another banner, A Banner of Crimson, uttering the war cry of “No Surrender”.

“Who would have thought as the bells chimed to welcome 2020, anyone could have predicted what we as a nation, indeed the world, has had to endure, and the civil freedoms and the economic downturn that has resulted due to the impact of the coronavirus pandemic, the effects of which will sadly continue to endure for some time to come.

“This morning we think about a city situated in the north west of Northern Ireland, a city correctly referred to as Londonderry, or the Maiden City woo,d but never won.

“In the ancient world, a city wasn’t a city unless it was surrounded with gates and walls. The walls were built of mud bricks, stone, wood, or a combination of these materials, depending on local availability. The walls served as the primary means of defence and protection from an invasion. So in times of war, all an enemy had to do was to surround the city wall and lay siege to it. The purpose of the siege is to starve the inhabitants of food and water – forcing them to surrender. Often a siege took months or even years. But it was very effective. All it took was time.

“The English word siege is derived from the Latin word meaning ‘to sit’. To besiege a city, an armed force surrounds and isolates it.

“When we look at our reading from 1st Kings chapter 20, and think also of our forefathers in that maiden city of Londonderry, both have similarities in military warfare, and although many centuries apart, the siege served the same purpose.

“Like King James, Ben-Haded, King of Syria, mobilized his army and set up a barricade and besieged Samaria in the Northern Kingdom of Israel, this was during the time of the Prophet Elisha.

“Sir Knights, what a year for me to pen these words to you all this morning, about being under siege and the hardship it causes and the effect it has on the many liberties you would enjoy.

“The pandemic that has originated from a market place in Wuhan, China, has engulfed the world and has laid us under siege, bringing death, serious illness, hardship through freedom of movement, mental health, and a downturn in the global recovery.  We are now with the rest of humanity, defending ourselves against an unseen enemy in the form of the coronavirus, or Covid 19.

“A siege and this pandemic have similarities. Both bring many of the same restrictions.

“Presently, the impacts of COVID-19 in daily life are extensive and have far-reaching consequences. One of which is to cause the postponement of this yearly assembly to celebrate the relief of Londonderry, a major historical event that played a key factor in the freedoms that we are missing today through this pandemic.

“When we see that iconic image painted on our banner of Governor Walker pointing towards the incoming ships that brought relief to the beleaguered city, I would ask you Sir Knights in our present circumstances to take heart from it.

“Look beyond this pandemic – yes, we have tough times but we will recover as previous generations had to do during famines, plagues, wars and depression.

“But we need to come back with a different attitude. Things we have taken for granted and cherished, must be cherished even more.

“In our call to worship, the psalmist reminds us that God is:

“Sir Knights we must, like our forefathers in time of difficulty and danger, look to our Saviour, our KING OF KINGS AND LORD OF LORDS, to sustain us and give us the faith, strength and commitment to overcome all that will be lying before us in the future. Let us live up to that slogan that is emblazoned on many a banner, “In God our Trust”.

“May the great “I Am” be with you all and your families until we meet again within our Encampment.

“Heavenly father we come to you this morning, as Royal Black Knights of the camp of Israel.

“In this time of uncertainty we ask you Lord to hear our voices, as we offer up our praises and our fears and anxieties to you our Saviour.

“From the depths of our being, we ask you Lord to hear our prayers.

“This morning Lord we, as a Christian Knighthood dedicated to your name and your word, would have gathered to celebrate the deliverance of our forefathers on the walls of Londonderry in that great but terrible siege, that brought death and hardship to those involved.

“Lord, we give you thanks for that deliverance, and how through you Lord it shaped the way for the freedoms our nation was built on and its people enjoyed.

“Father God, in our prayers this morning, we would ask you to look down on our nation and our world as we fight against this terrible pandemic that has afflicted us.

“Be with those affected, comfort those who are bereaved and give wisdom and success to those who are governing us, and searching for a vaccine to keep us safe.

“Heavenly Father, we give thanks for our forefather’s deeds of the past and the faith they put in you Lord, in their own time of danger. May we today find that same strength as we face the days ahead.

“Finally Lord, may your blessings be on the Royal Black Institution, and we your servants in Morning Star RBP 160 as we strive to praise and promote your name and your truths

“You are truly our refuge and our strength. We ask this in Jesus name. Amen

“I will leave you with these words penned by Charles Wesley

‘Other refuge have I none

‘Hangs my helpless soul on thee;

‘Leave, ah, leave me not alone

‘Still support and comfort me.

‘All my trust in me is stayed

‘All my help from thee I bring

‘With shadow of thy wing.’

“May the blessing of God the Father, God the Son, and God the Holy Spirit, rest and abide with each of us. Now and forever more. Amen.” 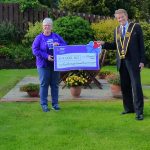