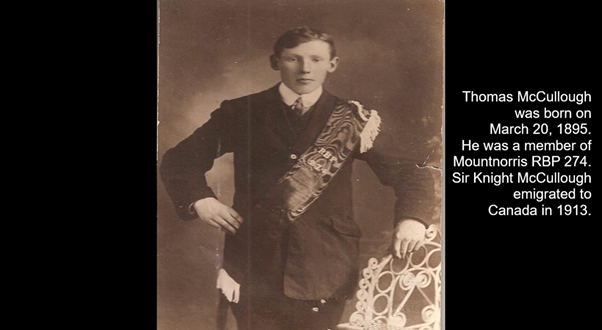 Lance Corporal Thomas McCullough died from his wounds after fighting in the Battle of the Ancre Heights in 1916 and is buried at Mountnorris Presbyterian Church.

He was a member of the Royal Black Institution, having joined Mountnorris RBP 274, before emigrating to Canada in 1913.

The Royal Black Institution remembers with thanksgiving to God the service and sacrifice of our Armed Forces who were involved in two World Wars and the more recent conflicts, including the Troubles in Northern Ireland. The Institution also remembers all those who are currently serving in defence of our nation.

We Will Remember Them.