The Sovereign Grand Master of the Royal Black Institution was the guest speaker at the ‘Last Saturday’ parade in Ballymoney.

Rev William Anderson joined with around 3,000 Sir Knights and 75 bands at the County Antrim demonstration.

Across the Province, upwards of 17,000 members of the Royal Black Institution were on parade at six locations – Ballymoney, Ballygowan, Dungannon, Holywood, Garvagh and Seskinore.

Thousands of family, friends and supporters turned out at all six venues to watch the 350 preceptories, most of which were accompanied by bands.

From the platform in Ballymoney, the Sovereign Grand Master encouraged the large assembled crowd to listen to the messages contained within the three resolutions.

On the first resolution of Faith, Rev Anderson called on all present to return to reading the Bible and applying its message to their lives today. He said: “We should read it expecting God to speak to us through His word. And on hearing Him speak be prepared to do what He asks.”

On the second resolution of Loyalty to Her Majesty Queen Elizabeth II, Rev Anderson said that this “must mean more than nice-sounding clichés, wrapping ourselves up in the Union Flag or simply calling ourselves loyalists”.

Rev Anderson recalled how Northern Ireland had endured a ruthless, violent campaign by republicans for the reunification of Ireland.

“As far as they are concerned, Ireland will be a much better place for us than remaining within the United Kingdom,” he said.

But Rev Anderson reminded his audience that the UK is the fifth largest world economy, and asked, “Can we afford to move to this wonderful utopia called Ireland?”

On the third resolution on the Constitution, Rev Anderson referred to some of the constitutional difficulties being faced in Northern Ireland today.

“Having the right to abort the life of a healthy baby, just because it is the woman’s right to have a choice, surely is wrong. Where is the right to life?” asked the Sovereign Grand Master.

He continued: “What of the defence of the family unit if we continue to break down the definition of marriage? The truth is we must have a clear understanding of who our relatives are if we are to avoid the ethical dilemma that awaits us if we allow the continued breakdown of family life.”

Rev Anderson concluded: “We need to seriously check our understanding against our experiences of the past before allowing such momentous changes to our way of life today.”

The Sovereign Grand Master called upon all present to remember what the Resolutions demanded:

The Sovereign Grand Master’s speech was received with acclamation.

Also from the platform at all six Last Saturday venues, a statement was read having been issued by the Chaplains’ Committee on behalf of the Royal Black Institution.

The statement expressed “dismay, disappointment and great sadness at the recent passing of the amendments to the NI Executive Formation Bill paving the way to force through legislation which compromises the sanctity of marriage and endangers the lives of unborn children”.

The chaplains stated that “the Royal Black Institution passionately believes in the right of the unborn child” and that “being a Bible-based organisation we also believe and affirm that marriage between a man and a woman was instituted by God with Adam and Eve”.

The statement called on elected representatives to do all within their power to prevent the changes from being implemented. 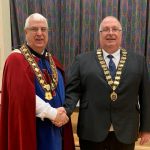