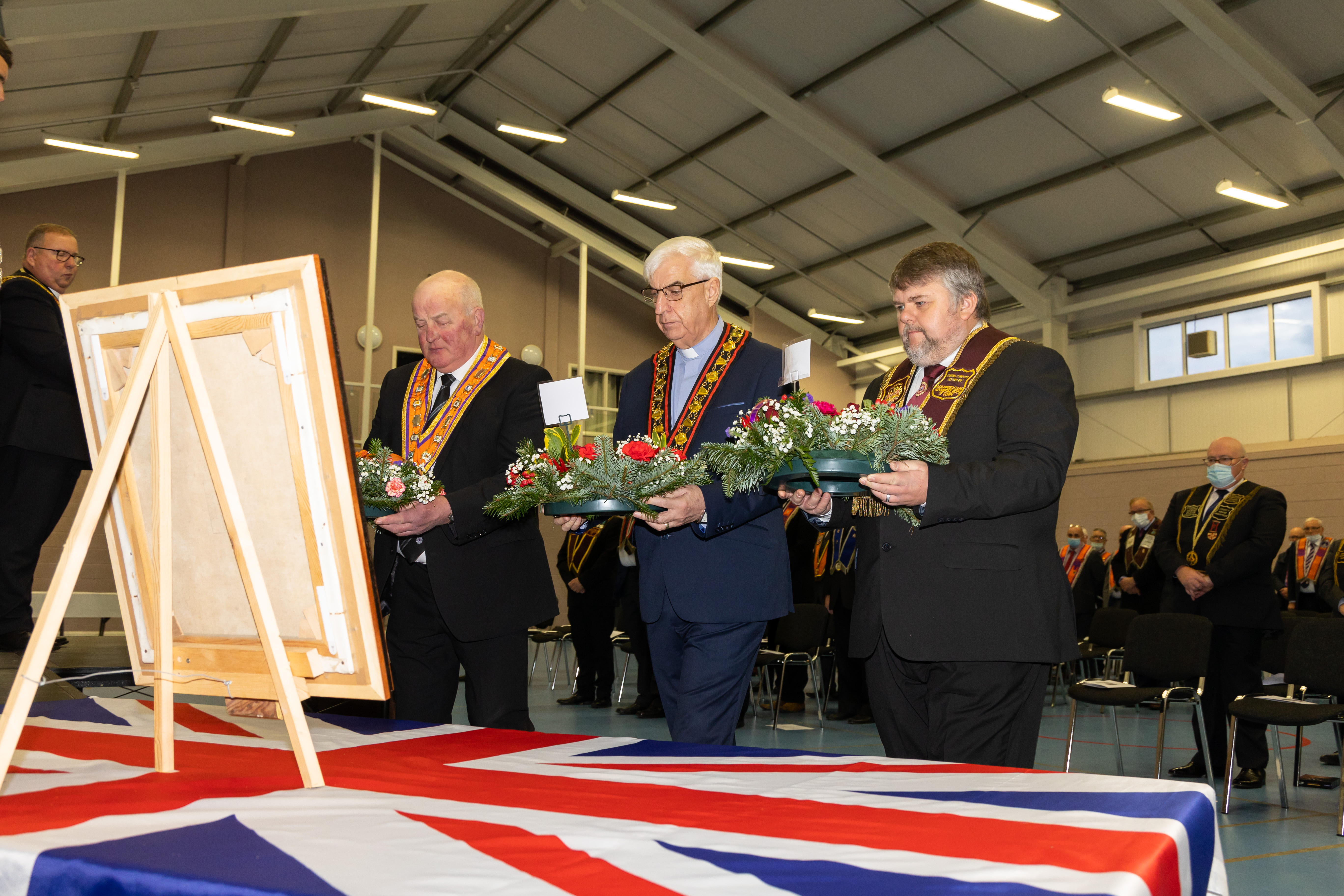 A prominent member of the Royal Black Institution whose life was cruelly cut short by republican terrorists, has been remembered on the 50th anniversary of his death.

Sir Knight Jack Barnhill – who was also a unionist politician – was killed by the Official IRA on Sunday, December 12, 1971. The married Strabane man was aged 66. No-one has ever been convicted for his murder.

A member of Artigarvan RBP 91, Sir Knight Barnhill held office at Preceptory, District, County and Imperial levels. He was also a dedicated member of the Orange Order and the Apprentice Boys, and was a unionist senator in the Senate of Northern Ireland at the time of his death.

Exactly 50 years after the sectarian killing of Sir Knight Barnhill, a special Service of Remembrance was held in his memory at Artigarvan Hall on Sunday, December 12, 2021, organised by Artigarvan RBP 91, Leckpatrick LOL 251, and the Artigarvan Branch, Mitchelburne Club, Apprentice Boys of Derry.

Senior leaders of the three Loyal Orders were in attendance, including Rev William Anderson, Sovereign Grand Master of the Royal Black Institution.

Afterwards, Rev William Anderson said: “The cold-blooded murder of Sir Knight Jack Barnhill by republican terrorists was an evil, dastardly crime. Others may wish to forget, but we will never forget the actions of paramilitary gunmen who skulked in the shadows to commit their crimes, nor will we ever forget their innocent victims.”

During the religious service, special floral tributes were laid in memory of Sir Knight Barnhill, and those in attendance heard a detailed account his life, which was devoted to family, faith and country.

Born John Eccles Nixon Barnhill on April 11, 1905, at Brickfield, Strabane, Jack (as he was known) was the middle child in a family of five children. His early education began at Prior School, in Lifford, County Donegal, before moving with his brother to Campbell College in Belfast.

After his education, he commenced employment at the family firm, Londonderry-based William Thompson & Co., a well-known seed and implement firm which also dealt with feed, fertilisers and milking machines, and where he would go on to become managing director. He was married in the early 1930s to Margarette, and the happy couple lived together at Brickfield.

He regularly worshipped at Leckpatrick Presbyterian Church, where he served as Clerk of Session.

In addition to his involvement with the Loyal Orders, Sir Knight Barnhill’s participation in politics began locally within the Leckpatrick and North Tyrone Unionist Associations.

Following the resignation of the Duke of Abercorn from the Senate, on July 5, 1962, the Unionist Party nominated Sir Knight Barnhill to fill the vacancy. Senator Barnhill made his Maiden Speech in the Senate chamber on February 14, 1963.

As an orator, Senator Barnhill was renowned, often quoting from poetry in his speeches, always retaining throughout his authentic North Tyrone accent. He was a particular advocate for the retention of Magee University College, the preservation of the railways, investment in the North-West, and agriculture. In 1967 and 1968, Senator Barnhill also served in the role of Deputy Speaker in the Senate, and at the time of his death in 1971 had served as a senator for a total of just over nine years.

On the day of his murder, Sir Knight Barnhill attended morning worship with his wife Margarette at Leckpatrick Presbyterian Church. It’s thought that in the afternoon, he was present at the funeral service of Sergeant Kenneth Smyth in Urney, Strabane, a member of the Ulster Defence Regiment who was murdered days before.

At around 7pm, Sir Knight Barnhill answered a ring at the door of his farmhouse at Brickfield, Strabane, which lay only half-a-mile from the Republic of Ireland. He was confronted by terrorist gunmen who opened fire immediately. Two shots rang out and his wife ran out into the hallway to be met by the sight of a gunman kneeling over her husband’s body. A second man then proceeded to carry a 50lb gelignite bomb into the home and placed it on the floor of the living room. The two then dragged Sir Knight Barnhill’s lifeless body into the home, deliberately abandoning him right beside the bomb. Margarette was ordered at gunpoint back into the kitchen and told she had two minutes to get out.

The terrorists then fled the scene, escaping over the border. Just as Margarette reached a neighbour’s house for help, the bomb exploded, destroying her home, with her husband buried among the rubble.

Reaction to the murder saw a widespread sense of disgust, revulsion and sorrow at what had happened.

Mourners – which included Cabinet Ministers, MPs and Senators – heard how Sir Knight Barnhill “was tireless in his efforts to serve not only the causes he deemed right and just, but also individual men and women with their personal cares and worries … At all times his first concern was for the good of his fellow man.”

Sir Knight Barnhill’s coffin was draped in the Union Flag, while his Royal Black and Apprentice Boys regalia lay on top. He was then buried in the family plot in Strabane Cemetery. At the graveside, the ceremony and duties associated with the burial of an Orangeman were carried out.

Traumatised and heartbroken by the loss of her husband, Margarette Barnhill later left the Strabane area, moving to England.

No criminal proceedings have ever been brought against those who murdered Sir Knight Barnhill. Neither has there been an inquiry into the cross-border nature of his murder. For the Barnhill family, there has been no justice.